Mysteries From The Right Hand, Poems by Steve De France 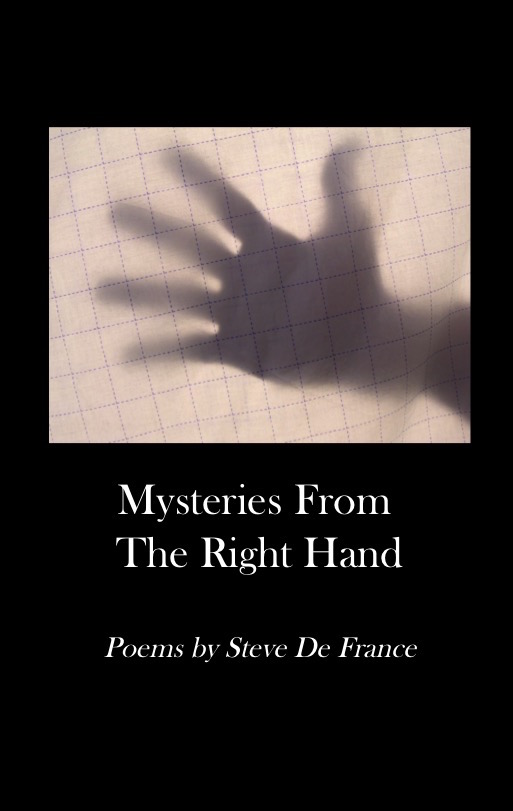 The sharp edge of wit, of piercing vision, dominates the jaunty work of Steve De France.

"The deep-throated cello notes of absolute poetic purity that come from an accomplished, experienced poet playing his instrument as only the best ones do...until your eyes fill up, and you'd swear you've been listening to angels sawing their wings against something fragile, and that would be your heart."--Karen Dabkowski

"A large percentage of the poetry in the journal emanates in the U.S.A. and the best of it comes from the quill of California's Steve De France, always an elegant writer, and often reminiscent of that great scribbler of the American yarn O. Henry."--Pat Winslow

"I know it sounds stupid to say such gritty images of loss and frustration and impending doom are delightful, but somehow Steve's voice--rises just above the unfolding tragedy (as I think one of his reviewers described it) and finds this clear place of calm sensitivity--a place that is not disconnected from the sorrowing world but is maybe just far enough from its desperate heart to become a platform balanced between inferno and paradiso, a never-quite-escapable purgatorio from which the poet can weep for those in pain and at the same time feel somewhat elated by the simple beauty of being alive."--Lawrence Welch

"Some of the writing is so good it just couldn't be any better. Like the description of love in Dancing, where the mother cleans him, wiping his face into a momentary sanity of quietness, stillness like sleep, and Roy holds her hand. This is beautiful. And this same poem is utterly unsentimental in its revelation of the necessary outcome seen in the flash of this light, this insight."--Barbara Holmes

"He is one of a handful of great names in the contemporary alternative press." --Joyce Metzger