The Hermit's Way of Being Human, Poems by George Kalamaras 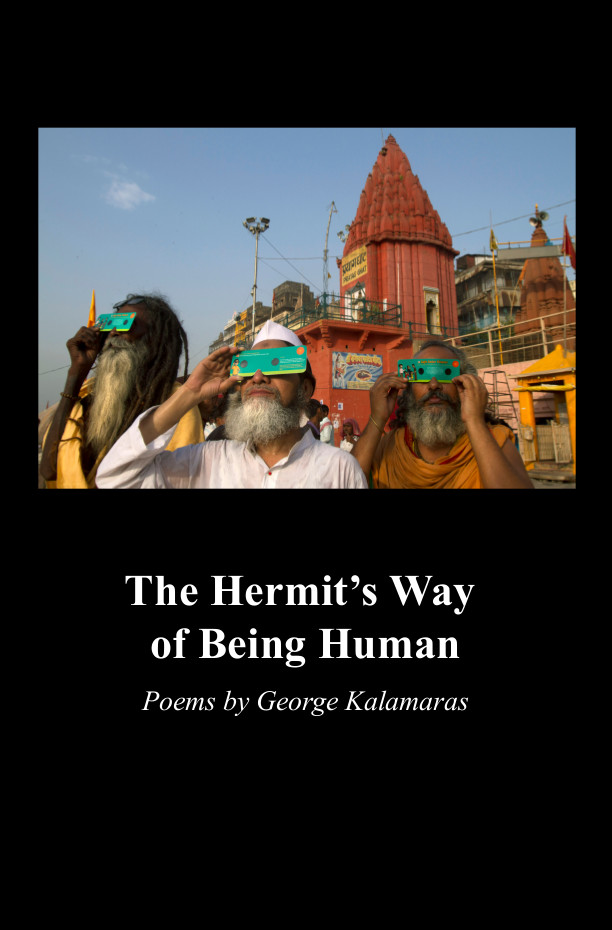 The bric-a-brac of the world finds a strange, sudden beauty in George Kalamaras' The Hermit's Way of Being Human: the human mind emerges from its self-enclosed exterior to embrace all the world's multitudes in these poems' stunning long lines.

"There's no poet writing today like George Kalamaras, with his weird amalgam of yogi-like serenity and convulsive Surreality. The Hermit's Way of Being Human resonates with a baroque austerity that would seem on its face impossible. But this achievement is nothing to the poet who brought India to Indiana and vice versa. Like a mischievous linguistic herbalist, he displays his rare words in jars-ranunculus, merthiolate, flammulated, dieffenbachia-even as he's at home with stone and bone, clay mug and bowl. From the topographical to the spiritual to the most intimate recesses of the body, all is within his purview; he has scaled the mountain of himself, and left this book as a guide." -Garrett Caples

"George Kalamaras is a hermit among multitudes-and he is the best at explaining his poetic technique: 'Crunch a diamond, and the entire canal fills with starlight.' Most couplets crawl across the page; his soar on their butterfly hinges. 'It was my ultimate discipline to astonish even my practice.' And astonish he does. This is The Book of Everyday Life. This is The Book of Beauty and Aching. This is The Book of Humanity and Vulnerability. This is The Book of Excruciating Love and Death. If you need to carry something beautiful in your mouth-like a song or a gorgeous rag-then carry this book between your teeth. Kalamaras has discovered a new language made of ancient words, combining 'a transfusion of starlight' and 'the lightning crack of the mouth.' This book is many things, but primarily it is a love poem-a complex interwoven series of love poems that are written to language and skin and birth and death and and. 'One time I came to you as lightning. You, the fierce, almost-soothing rain.' These are translations from a language we have forgotten how to speak-roots and all. He creates poems where he drags himself 'barely whole, into the first of your birthing world.' Poems drenched in desire and transcendence: 'All I can feel is desire. / My body reaches out to insert itself into the universe.' Poems soaked in mortality and birth-broth and the deepest emotions-all the diamonded parts-all that is hermit and human." -Patrick Lawler

"In The Hermit's Way of Being Human, George Kalamaras borrows the image of the hermit much as he 'borrows' our language and the ancient philosophies of India and China, not to get away from the world but to reach out toward an expanded perception of what being in the world might be. Assisted as well by a Surrealist's reliance on the subconscious, he carves poems of surprising disjunctions and metaphoric linguistic alertness. 'I heard a crystal fiddle in the seminal fluids of the moon,' says one poem. Another says, 'I touch the place in you that is between things and know more and less of what I am.' This book gives us new, meditative ranges of language in reviving the age-old longing to get away from the distractions we invent for ourselves. It has a strong sustaining tone, as though Kalamaras was, too, another of Whitman's children driven to give succor and encouragement to us all."-Roger Mitchell

George Kalamaras, Poet Laureate of Indiana (2014-2016), is Professor of English at Indiana University-Purdue University Fort Wayne, where he has taught since 1990. He is the author of thirteen previous books of poetry. His six previous full-length books include Kingdom of Throat-Stuck Luck (2011), winner of the Elixir Press Poetry Contest, The Recumbent Galaxy (2010), co-authored with Alvaro Cardona-Hine and winner of the C & R Press Open Competition, and The Theory and Function of Mangoes (2000), winner of the Four Way Books Intro Series. His chapbooks include The Mining Camps of the Mouth (2012), winner of the New Michigan Press/DIAGRAM Chapbook Award. He is the recipient of a Creative Writing Fellowship from the National Endowment for the Arts (1993) and two Individual Artist Fellowships from the Indiana Arts Commission (2011 and 2001). During 1994, he spent several months in India on an Indo-U.S. Advanced Research Fellowship from the Fulbright Foundation and the Indo-U.S. Subcommission on Education and Culture. After living many years with their beagle, Barney, George and his wife, writer Mary Ann Cain, have welcomed a new beagle hound, Bootsie, into their home. They live in Fort Wayne, Indiana, and regularly return to northern Colorado, where George and Mary Ann lived for several years in the 1980s.