Have at You Now!, Poems by John Gery 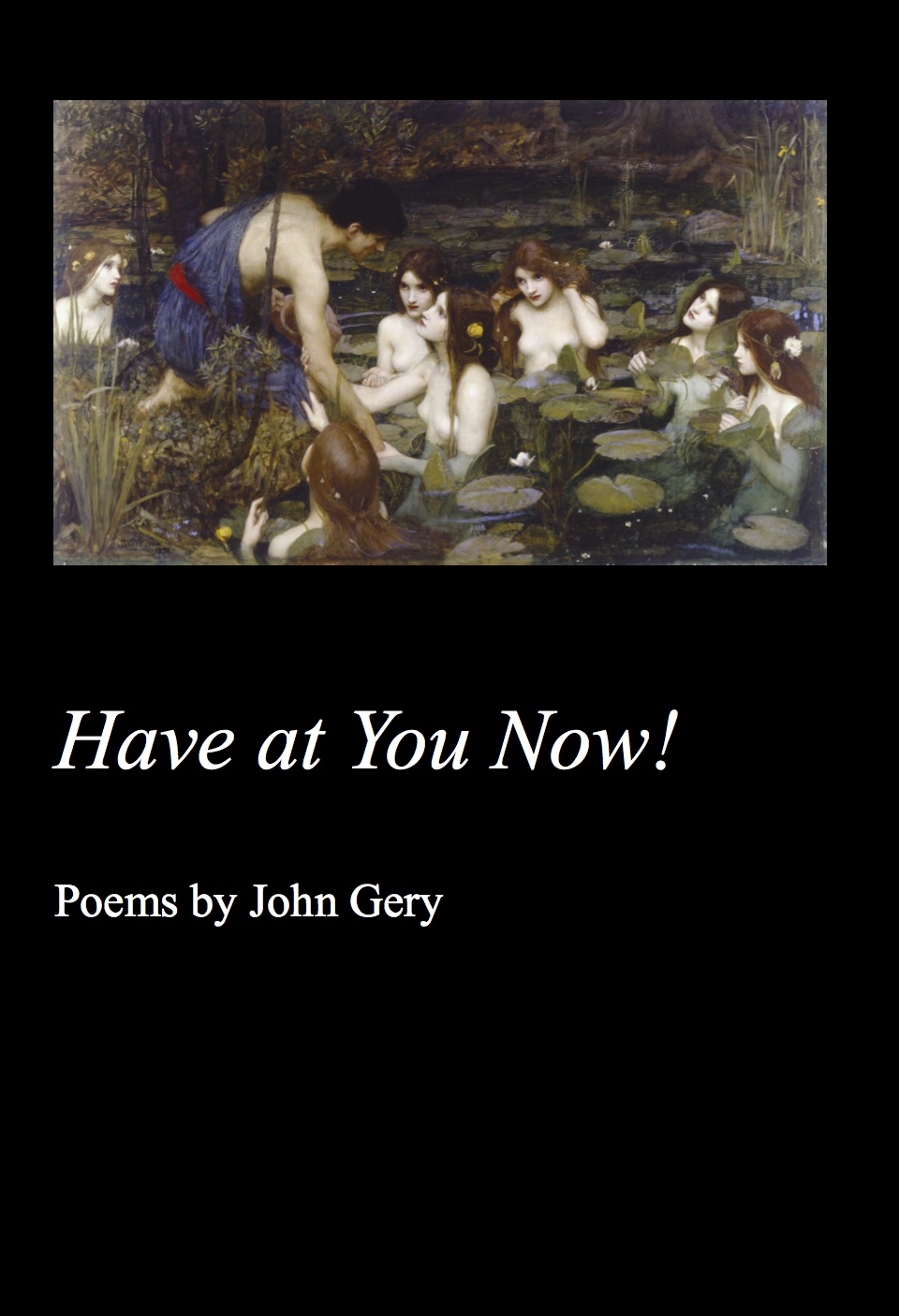 “The poems in John Gery’s Have at You Now! are acted upon with the same verve and wit and parry and heart as that scene from Hamlet from which the title is taken. These are the poems of a huge imagination and a huge intellect whose observations are at once as capable of being as fully engaged in the philosophical as in the familial. John Gery is a powerful traveler poet who counters experience with thought, form with idea, technique with delivery. Gery is one of the best poets writing today and I go to him repeatedly for guidance and direction. Have at You Now! is nothing short of a master class in how to make poems that matter.”—Darrell Bourque

“The poems in John Gery’s new collection Have at You Now! are divided into sections, each headed by a phrase from one of Prince Hamlet’s soliloquies. One phrase though is not used, but all the time silently summonsed—‘The time is out of joint’... Whether reporting from war-torn Belgrade, or from New Orleans, devastated by natural catastrophe, or recoiling at the repercussions of U.S. foreign policy, Gery’s moral outrage is continually leavened by his rigorous self-questioning, which gives so many of the poems here their sinewy argumentative feel, brilliantly maintained over long periods by a supple syntax answering each swerve of the thought. Seamed with literary allusion and ‘storied association,’ Gery is nonetheless not a ‘literary’ poet in any nostalgic or indulgent sense, his burdened people and his ravaged places are recognizably of the present moment. A long set-piece response to Whitman, ‘Appeasement,’ is countered by rueful, oblique poems, an address to the birds of the dawn chorus, or a fine homage to Philip Larkin—pained, introverted, depressive, and wickedly funny, the opposite of Whitman... I am impressed by the intelligence, the range, the metaphysical wit of these impassioned poems, in which the poet himself remains perpetually vigilant and self-vigilant, not only in political pieces, but even in the splendid poems of erotic imagining.”—Stephen Romer

“‘Where is the next great fear?/When is the next bright city?’ asks New Orleans poet John Gery in his new book of sad poems, brilliant and brave, international in scope, political in vision, ironic and formal in execution, timeless as art. Bravo!”—Hilda Raz

John Gery’s previous books of poetry are Charlemagne: A Song of Gestures (Plumbers Ink, 1983), The Enemies of Leisure (Story Line, 1995), American Ghost: Selected Poems (English-Serbian, tr. Biljana Obradovi?, CCC, 1999), Davenport’s Version (Portals, 2003), A Gallery of Ghosts (UNO Press, 2008), and Lure (English-Serbian, tr, Svetlana Nedeljkov and others, NKC, 2012), as well as two chapbooks. His other books include Nuclear Annihilation and Contemporary American Poetry: Ways of Nothingness (UP of Florida, 1996); the literary guidebook, In Venice and the Veneto with Ezra Pound (with Rosella Mamoli Zorzi, Massimo Bacigalupo, and Stefano Maria Casella, Supernova, 2007); Hmayeak Shems: The Poetry of Pure Spirit (with Vahe Baladouni, UPA, 2010); two edited collections of essays on Ezra Pound and on Imagism; and two edited anthologies of poetry. With Vahe Baladouni, he published For the House of Torkom (CCC, 1999), a translation of the prose poems of Armenian poet Hmayeak Shems. He has received, among other awards, a Creative Writing Fellowship from the National Endowment for the Arts, a Fulbright Fellowship to Serbia, a Research Fellowship at the Institute for Advanced Study, University of Minnesota, three Artist Fellowships from the Louisiana Division of the Arts, and the European Award of the Circle Franz Kafka, Prague. A Research Professor of English and Seraphia D. Leyda Teaching Fellow at the University of New Orleans, he directs the Ezra Pound Center for Literature, Brunnenburg, Italy. He lives in New Orleans with his wife, poet Biljana Obradovic, and their son, Petar Gery.