The Mystery of Systems, Poems by Carl Rosenstock 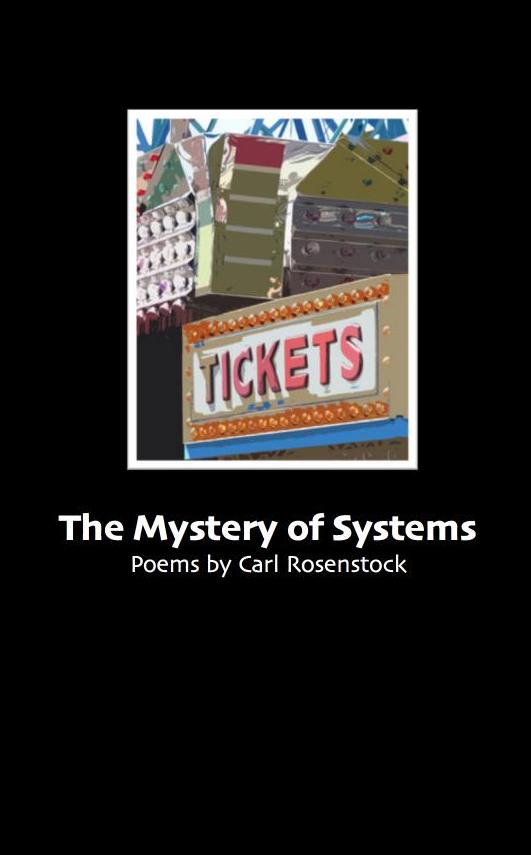 "This wild and completely engaging first book has so much going for it - humor, from dry to prankster; craft - from a nursery rhyme variation à la Kafka to free verse layered with tricks of a formalist's trade to those uncanny translations; intellect - a world view that's streetwise but tuned to the history of that thing; soul - meditative, moody, and wrapped in an attitude that'll warm your bones. Even if you've read a million books of poems, you've never read anything like this." - Roger Weingarten

"The Mystery of Systems, composed in equal parts of original poems and gracefully-done 'translations' of two imaginary Russian poets, coheres around photography as a phenomenon that paradoxically captures a real moment and isolates it in ways that render it elusive, a construct of absences as well as presences. Photography as both subject and metaphor serves as the matrix for this collection in which both the poet and his 'translatees' speak as beings who erase themselves as they speak and leave us with perspectives that are complex, unencumbered, and resonant with possibilities. A textured and immensely thoughtful book, Rosenstock's first collection offers poems that both affirm and question language itself as though it, too, were a photograph." - Leslie Ullman

Carl Rosenstock was born in Albany, New York, and grew up on a farm near there. He received a B.A. in Asian History from Union College, and an M.F.A. in Creative Writing from Vermont College. He lives and works on the westernmost end of Long Island, in Brooklyn, New York. His work has appeared in various magazines and anthologies. He helped curate theVillage Reading Series, and then curated theNight-&-Day Reading Series. He was the Poetry Editor of Memoir Journal, as well as serving on their editorial board. His first book, The Mystery of Systems, was published in 2017 by CW Books. To see more of his work, as well as purchase his book, please visit his website https://carlrosenstockpoetry.com . … & if you're on Facebook, visit - https://www.facebook.com/carlrosenstockpoetry .