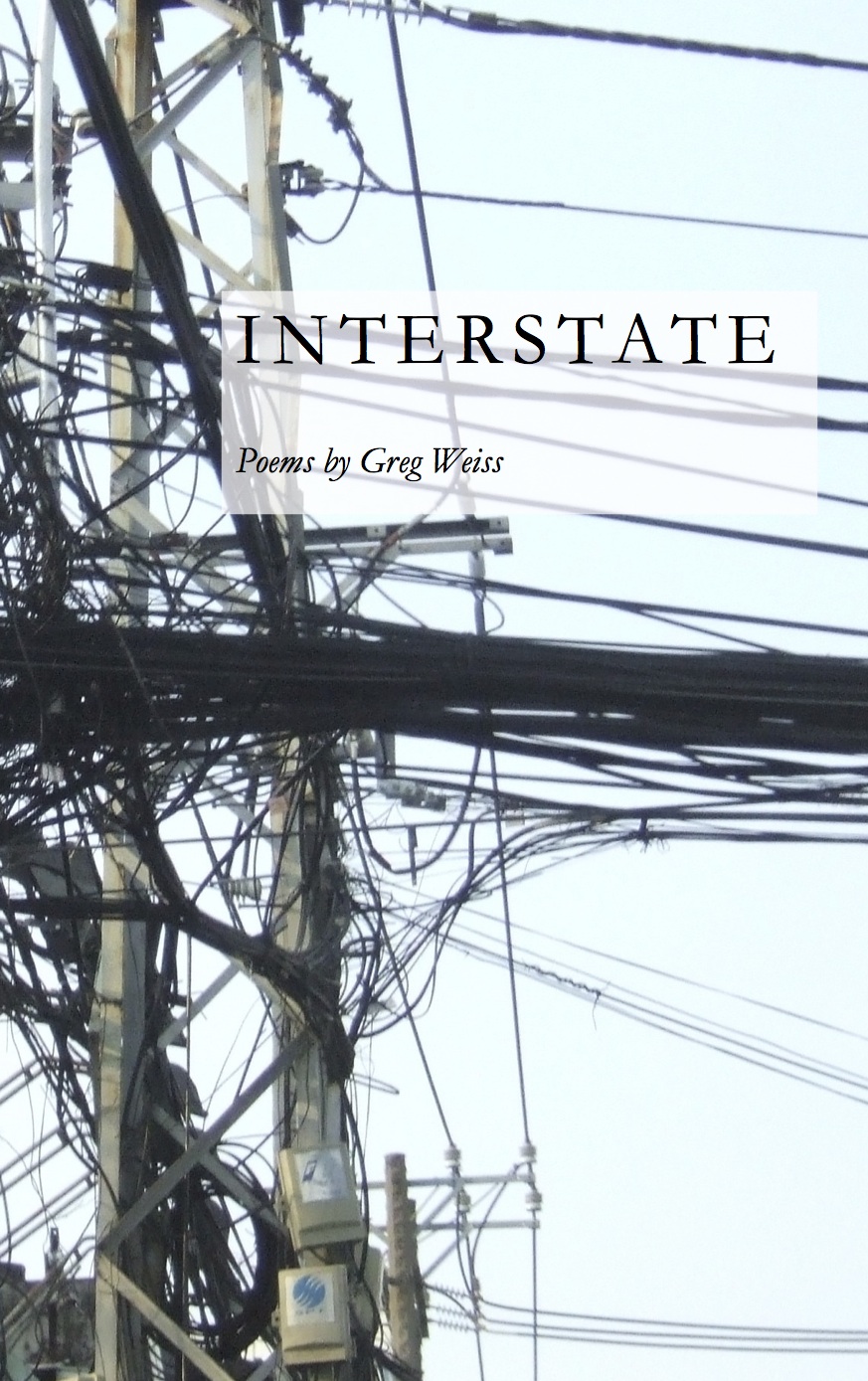 In Interstate, Greg Weiss embarks on a journey in search of wisdom, of peace, that eludes his grasp: "screaming on a road to somewhere/like a trace of a possibility of a possibility."

"Allow me to say, too, how amazing I think these poems are. Truly. Thrilling and brilliant and oddly tragic. I bow down to you from Brooklyn."-Timothy Donnelly

"Greg Weiss's debut collection of poems is both immediate and far-reaching, both an exploration of the domestic and civic and an analysis of the wider culture-most especially contemporary Rock and Roll. These poems' music is that of a thoughtful listener who makes us better listeners. Their images make the world more interesting to the mind and thrilling to the heart. The words are their own Rock and Roll."-Angela Ball

"Like a red brick on a plastic chair, the material world abounds. Weiss's precise descriptions, tuned always to philosophical preoccupations, keep sensory experience from being 'only' sensory. Orientation abides because it cannot preside, must renew itself with every minor or major dislocation. Not content to inventory the plenty of experience as fact-recitation, Weiss meets the impossible pressure of simultaneity with comic-cosmic pliancy and unusual wisdom. Rapport wrestles angst. Aubades coexist with blues. Attention finds the sexy vibe between motion and coordination. Questions and admissions spring from the poems with arresting clarity and timeliness. How is there something rather than nothing? It's hard to know how to handle things. Sometimes I don't know what to do. This is a book with searching and resourceful approaches to dwelling. Do we burrow, or do we venture, or do we scope out the wavy in-between? Is solitude a sin? Does everything lean on each other? I feel enlightened by this rigorous and funny book. I am made smarter by it, and leavened."-Sarah Gridley

"Greg Weiss's wonderful debut, Interstate, covers the map, takes us to places such as the Middle East, New Orleans, and St. Louis. Each poem, a kind of jam-packed modern-day surrealist short story, pushes the limits of poetic narrative while dropping us into the middle of the lives of characters-from Nicole to Butch Cassidy to Elisabeth to Jack Johnson to Atticus Finch. Weiss reminds us of the world in which we too live-a world of the word game Ghost and Everybody Loves Raymond and Titanic and The Diary of Anne Frank and VH-1 Soul and In the Aeroplane over the Sea, familiar flashes on the trip along Interstate, where 'rich in fishtank and emotive jukebox, this fetid, basement-bar terrarium drifts out past the blinking green and flocks of memories bloom.'"-Julia Johnson